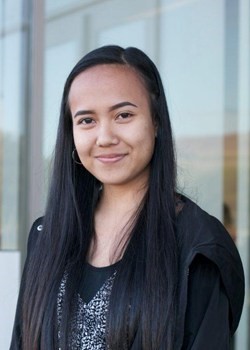 University of Hawaiʻi–West Oʻahu junior Leanne Aira Villanueva remembers feeling forlorn as a fifth-grader, having gone from being one of the top five performing students at her school in the Philippines to being a troubled student at August Ahrens Elementary School in Waipahu.

“It was a shock for me,” said Villanueva of her move to a new country. Determined to succeed, she approached teachers for tutoring and put in time after school to overcome her difficulties.

Flash forward to earlier this year, when her story caught the eye of Hawaiʻi Governor David Ige, who posted to Facebook. “Despite being a young immigrant, Villanueva worked hard to get to where she is today because she is determined to realize a successful future someday,” he wrote.

Determination paid off, and Villanueva officially earned an associate of arts degree from Leeward Community College through the Early College program weeks before graduating as a Waipahu High School valedictorian with a 4.1 GPA.  She is now studying business administration at UH West Oʻahu.

In high school, Villanueva committed to an early college program after hearing Mark Silliman, Waipahu’s Early College director, speak about the opportunity to earn a college degree at no cost while in high school.

“It really appealed to me,” she said. It was still an arduous path to take. Villanueva found herself at school from 8 a.m. to 4 or 5 p.m. working on her high school homework before her college classes later in the day.

“I had great teachers, great professors, who were always there to help,” she says. She also credits Silliman, Waipahu principal Keith Hayashi, Ige for his support of early college programs and the McInerny Foundation as contributing to her success. ”Without them, I would not have been in the position I am today, achieving what I was able to achieve. My success is also their success.“

She recommends the program to others because of the opportunity to gain college credits at no cost and for the experiences it offers.

“If you’re really driven, there’s nothing that will stop you from making the journey,” said Villanueva, who was awarded a Chancellor’s Scholarship at UH West Oʻahu. The scholarship is given to high-achieving high school graduates acknowledging academic achievement, leadership and community service.

Read more about Villanueva, including her experience speaking at the governor’s inaugural celebration on behalf of the Early College program, a surprise for her parents at her high school graduation and why she chose to attend UH West Oʻahu at E Kamakani Hou.