The University of Hawai‘i School of Architecture Alumni Association (UHSAAA) held its Beaux Arts Ball for the first time in several years at the Hilton Waikiki Beach Hotel on Saturday, April 8, 2017. The inaugural ball hosted over 170 professionals from the design, engineering and construction industries, as well as students and faculty from both the UH School of Architecture and Honolulu Community College’s AEC Program.

The ball, themed “Aces of Architecture,” was modeled after the celebration in Paris originated by students of the Ecole nationale superieure des Beaux-Arts and held annually since 1892. This event honored the Ace students of the UH School of Architecture, the Ace buildings found in the Vegas skyline, and the Aces found in the decks of cards on the tables in the Las Vegas-style casino that was held at the ball.

In a ceremony at the ball, UHSAAA added $13,000 to its endowment fund which stands at over $130,000. Our goal for future Beaux Arts Balls will be to raise funds to augment our student scholarships and support more UHSAAA alumni and student sponsored activities.

We’d also like to thank our generous sponsors for supporting the event:

Be on the lookout for next year’s Beaux Arts Ball to be announced later this year! 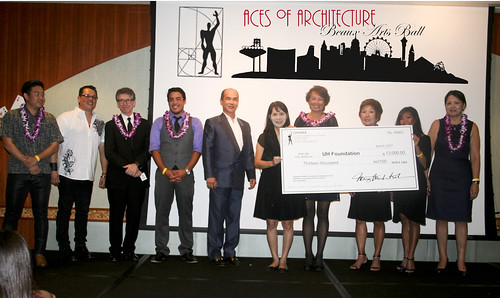