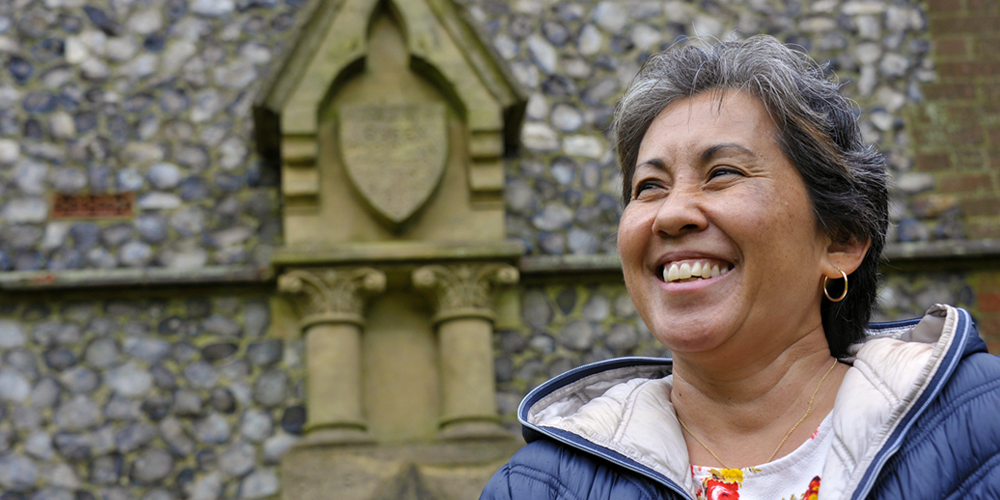 “It feels like coming home,” said Colette Higgins, Windward Community College’s Dean of Academic Affairs for Division I and Academic Support. The longtime history professor at Kapi‘olani Community College stepped into a new role at Windward this year, in the neighborhood she’s lived in for decades. “This is my community. I live 15 minutes away, and it feels as if everybody knows everybody. So-and-so works in your office as a student worker, and aunty works in the cashier’s office, and you’re going to see them both in Long’s or Safeway.”

The University of Hawai‘i alumna knows something about coming home. Out-of-class conversations with Bob Ferrien, a favorite professor at Kapi‘olani CC where she began her college studies (AA ’88), inspired her to major in history and then to consider teaching as a career. “It planted a seed for me,” she explained. “In my final semester at Mānoa (BA ’90, MA ’92) working on my master’s, I wondered what I was going to do with my degree. I remembered my conversations with Bob and said, ‘Oh wait. I can go back and teach.’”

Higgins returned to her alma mater, where during her studies, the Diamond Head campus was still under construction. “I had to buy books and register at the Pensacola campus,” she said, “and be careful that all my classes were at Diamond Head, so I wouldn’t have to travel between campuses every day. We didn’t even have a cafeteria yet, and we ate at a lunch wagon under a tree. The teachers had offices in the old officers’ homes, and we had classes in the old barracks on property that used to house a military facility.”

She taught at Kapi‘olani for 24 years, where she enraptured students with her teaching style. “My approach is storytelling. People who lived in the past had the same needs and desires as you. They needed a roof over their heads, clothing, food, and relationships. These are real people, so I tried to make history come alive. Let’s find out what their stories are; let’s see what it was like for them to live in that time. You can always look up important dates! That’s a wasted question for me to put on a test! I’m more interested in the why and the how, the interesting parts of history.”

A love of storytelling led Higgins to explore the life of Queen Kapi‘olani. Asked to share a presentation for campus visitors about the queen her school was named for, she developed a fascination with “the forgotten queen.” Only one book had been published about Kapi‘olani, and she said “seemingly few Hawai‘i residents know much about her.”

Years of research and many presentations later, she took a sabbatical in 2016 for a 56-day journey tracing Kapi‘olani’s footsteps when the queen visited London for Queen Victoria’s golden jubilee in 1887.

Queen Kapi‘olani and Princess Lili‘uokalani traveled by ship to the U.S. West Coast, by train to the East Coast, and by ship across the Atlantic to attend festivities 7,000 miles from their kingdom. From April through June, 129 years later, Higgins followed their path, stopping where Kapi‘olani stopped, and photographing places she visited. Ma ka hana ka ‘ike, she quotes in the travel blog she kept during her trip: In the doing, one learns.

Upon her return to Hawai‘i, Higgins wrote, “Completion of this journey feels like the beginning of a much larger project.” She could have been foretelling completion of her time at Kapi‘olani CC. Shortly after she came home, she accepted her new position at Windward. “I miss the good people at Kapi‘olani,” she said, but now she finds herself in a position to work with new teachers who can benefit from her experience, as she was once influenced by the teachers who became her colleagues.

For Colette Higgins, leaving one home means returning to another.