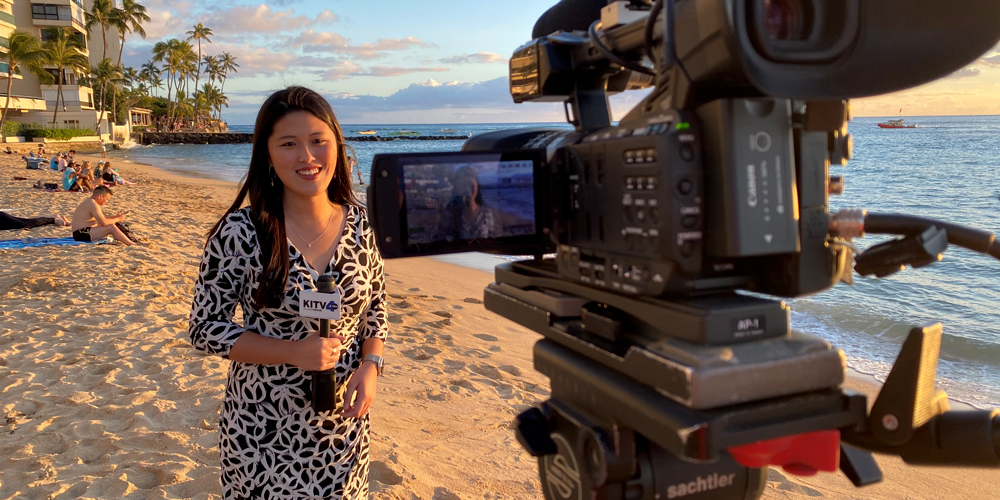 Nicole Tam received her bachelor of arts degree in both journalism and Chinese in 2018 from the University of Hawai‘i at Mānoa. Originally from Hong Kong, she became interested in the communications field at an early age and is now a reporter for KITV4 Island News.

We asked Nicole a few questions about her time at UH, her career and what advice she'd give to students.

How has your UH education helped you in your career?

My experience at UH Mānoa opened doors for me professionally. The journalism department faculty and staff are all very supportive and always recommended opportunities for me to expand my portfolio. I’m also thankful to the campus newspaper, Ka Leo, for being the platform that allows student journalists to explore and grow. All of those experiences led me to a job in the field before graduation.

Describe your career path. How did you end up doing the work you’re doing today?

I was born and raised in Hong Kong. One day in third grade, I saw a weather report on TV and knew I’m going to become a communicator of some sort. When I moved to O‘ahu in 2007, the idea was tucked away for a bit as I adjusted to Hawai‘i life and continued to polish my English. Another random day in high school, I emailed a few news anchors I recognized. Surprisingly, Hawaii New Now’s Keahi Tucker replied and even offered me a tour at their studio. He told me that day to always work hard and keep chasing after my goals. Here I am, years later. My English is still funky sometimes, but I have a lot of supportive people around me to teach me things - like the difference between “can be” and “could be”. Somehow, distinguishing it’s and its is never a problem.

What do you love most about your work?

Being nosy and getting away with it. Ha! Part of the job is being able to learn about someone within half an hour. Normally, you can’t just start asking people personal questions and not look creepy. But as a journalist, you can! Aside from meeting new people every day, it’s also rewarding to know I am a source people can rely on for information and things that are happening in the community.

Who would you say was your most influential mentor while in college?

There are so many people who helped me throughout college. I was lucky to have a part-time job at KITV4 as a digital producer almost two years before graduation. In between procrastinating to complete assignments for five to six classes, I am trying to learn from the pros on the job: from reporting, shooting, editing, and writing. Whenever I needed help, Robert Kekaula was (and still is) always willing. Even though his critiques sound harsh at times, I realize it’s all to help me become a better storyteller. Not only is a journalist’s job to report facts correctly. It’s also digging below the surface and delivering a story that people will care about.

What advice would you give students to help them prepare for their career?

Always give 100% effort - from the easiest assignment to the biggest project in your career. If you have the attitude to strive for excellence, it will become part of who you are and your work ethic. Work hard, and play/party just as hard. As Ferris Bueller once said, “if you don't stop and look around once in a while, you could miss it."

To connect with Nicole, log-in/sign-up for UH Connect at connect.uhalumni.org.