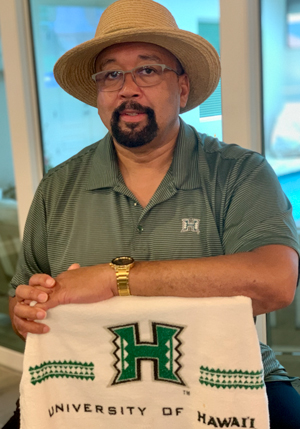 Byron Shorter is a proud UH alumnus, passionate UH proponent and an active part of the UH East Coast ‘ohana. For over 25 years he's been a part of the Washington DC chapter and has served in several leadership capacities, most recently as president of the chapter for a span of 10 years leading up to the appointment of current president Ernie Takafuji.

After relocating to Davenport Florida in early 2020, he hopes to take his experiences with the DC chapter and organize a UH alumni group in Florida.

We asked Byron a few questions about his background, his time at UH, his experiences with the DC chapter and what he loves most about participating in alumni activities.

Tell us about yourself. Where are you from originally, where are you living now and what have you been up to lately?

I am originally from Belle Vernon, Pennsylvania, a small steel mill, coal mine town located approximately 20 miles south of Pittsburgh. We just recently moved to Davenport, Florida just a 20 min drive southwest of Downtown Disney in Orlando. With the current situation with the pandemic, we’ve restricted our movements, but it has afforded us time to decorate our home and downsize.  We had planned our move a year and had opportunities to become familiar with the area on several trips to Orlando from Washington DC.

What’s one of your fondest memories of your time at UH?

As a kid, I always dreamed about someday visiting Hawai‘i. When I arrived, I had the instant feeling that Hawai‘i was going to be my second home. I loved the people, the sights, the sounds, the smells and especially the food! My sociology professor selected me to be one of the first upperclassmen to be a leader in the newly formed Sociology Freshman Seminar classes. The experience helped me in my decision to study the Asian Pacific region. This decision helped me in my future career in the Defense Department. I was accepted into the Defense Leadership and Development Program where I worked in and headed up programs that involved countries located in the Pacific Rim. I was also selected to attend the now Daniel K. Inouye Asia-Pacific Center for Security Studies on two occasions.

What do you like the most about Florida so far?

I like the location because it will be a good “Launching Pad” to the Caribbean either by sea or air.  The weather isn’t quite Hawai‘i’s but it’s close. It’s a little humid but it beats snow and cold in the winter! Plus, I have several palm trees in my yard! Once they find a vaccine or drugs to fight this virus, I know we will enjoy Florida more.

You were previously an active member of the DC chapter. How did you initially become involved with the chapter?

What roles did you take on during your time with them? I became a member over 25 years ago when retired General Dave Cooper and several other Hawaiian born veterans stationed and living in Washington, DC formed the chapter. They came up with a position that I could fill which was “Athletic Coordinator.” I got the position because I played basketball, football, softball, bowled and had studied karate plus I was the youngest in the group! I worked my way up by becoming vice president for three years and president for 10 years until my move to Florida.

What do you enjoy most about participating in chapter activities?

While president, I started representing UH at local college fairs in the DC area, hosted freshmen sendoffs, supported UH Smithsonian and Congressional Interns during their stay, wrote job recommendations, helped with job searches and continued mentoring. I enjoy giving advice when asked and being there when needed. We are an ‘ohana…we celebrate each other’s achievements and milestones, support each other during sorrow and loss. I hope that there will be interest in starting a chapter in the state of Florida.