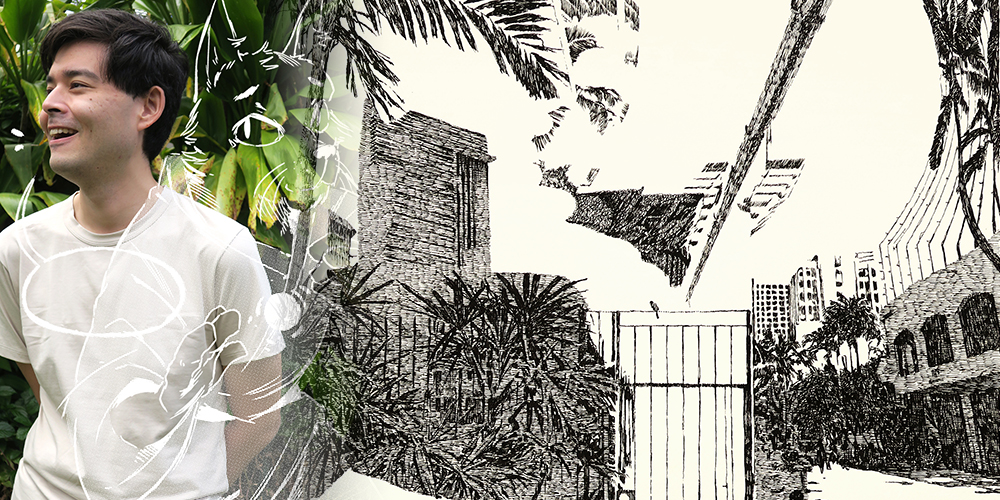 University of Hawai‘i at Mānoa alumnus Brady Evans is a comic artist and illustrator based in Honolulu. Born and raised in Hawai‘i, Brady draws inspiration from folklore, family stories and history and has been featured in numerous group and solo exhibitions.

Read on to learn more about Brady’s journey, his experiences at UH and the inspiration behind his work.

What initially drew you to art? Was it something you were always interested in?

As far back as I can remember I’ve enjoyed drawing and creating art. My parents took me to art exhibitions and encouraged me to look closely at things, pointing out interesting parts of the artworks we saw on view. I distinctly remember being taken to one of the iterations of the “International Shoebox” exhibitions at the University of Hawaiʻi Art Gallery in which artworks were limited in size to the confines of a shoebox. It showcased the creativity of artists working within limitations. Years later I would help install the final iteration of the show in 2009 as a part of a gallery management class, so it was nice to see things come full circle.

Going into college, did you always know you wanted to major in art and minor in Japanese?

By the time I started high school I already had a strong desire to go into the arts and by my senior year I was taking AP Art, this allowed me to skip a beginning drawing course when I entered college. As for Japanese I took language courses throughout high school and in a similar vein to my AP courses I tested out of some earlier classes and started in the middle of the Japanese Language program my freshmen year. Growing up in a Japanese-American household I was surrounded by the culture and wanted to gain a deeper understanding of it through the language.

Where do you draw inspiration?

I’m inspired by folklore from around the world, most notably from Japan. Family stories and my own experiences growing up in Hawaiʻi are also a prominent undertone to many of my works. I like to think of my creative process as a blending of all of these things, like taking a part from here and section from there and combining them into something new.

Of all the work you’ve done, do you have a favorite? If so, what’s the story behind that piece?

In 2020 I was included in a group exhibition at the Honolulu Museum of Art at First Hawaiian Center called “Downtown Drawings” which asked artists to create new work inspired by the Downtown Honolulu area. I created a series of three ink on paper drawings titled “The Times We Met at Kou.” “Kou” was the ancient name of the area and, as it is today, was known as a meeting place in old times. The drawings peel back the many layers of history built on top of each other, from its time as a place for games, to its royal connections as an early seat of government, to its current role as a financial center. I wanted to show a space in flux with the layers of history rising up and mixing together, the eras or “times” meeting one another.

What is your fondest memory of your time at UH? What makes that memory so special to you?

In 2010 I had a wonderful opportunity to intern in the University of Hawaiʻi Art Gallery to help with their retrospective exhibition on the American illustrator Edward Gorey. The show was incredibly complex with hundreds of artworks on view from book covers to original illustrations and stuffed plushies based on the artist’s characters. I have fond memories watching the show slowly come to reality over the year I spent with the project. This internship was directly responsible for my career path into museum work which I pursued shortly after graduating from UH Mānoa.

What advice would you give to an incoming UH student?

Try different experiences and classes in your time at UH, you never know what might pique your interest and lead you down a different path. I have many friends who started at UH set on one major then switched after they took a few classes from another discipline. Keep an open mind and enjoy your time there.