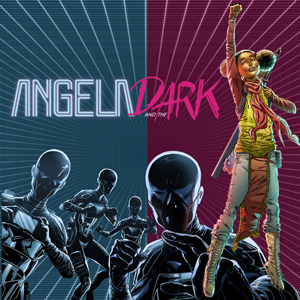 A. Diallo Jackson received his master of arts degree in English from the University of Hawai‘i at Mānoa. After spending some time in the tech world, he decided to fully pursue his lifelong passion for writing. Diallo went on to write the comic book series Angela and the Dark and The Paranormals. He is also the writer of 2017 Producer's Guild winning Weekend Shorts short film Beautiful Strangers.

Along with published novels The Claymore and the science fiction serialized novel Maya, he has also written for a number of internationally recognized publications including Yahoo! Games, US Weekly and Geek & Sundry.

We asked Diallo a few questions about his time at UH, his career and what kind of advice he’d give to students.

How has your UH education helped you in your career?

My time at UH will always be special to me. Sometimes I have to pinch myself to believe I was actually able to not only experience it but excel there. One thing that I loved the most about the UH campus and culture is that unlike other schools, the makeup of the student population was effortlessly multi-cultural from top to bottom, faculty, staff, and students. As this is a message I come back to again and again in my writing, the idea that so many people of so many different cultures could come together to share in the spirit of ‘ohana is something that reminds me that it is possible for the world at large. We've just got to treat each other like they are a part of our family and community.

Describe your career path. How did you end up doing the work you’re doing today?

After I graduated I found myself right in the middle of one of the first big tech booms and entered the field almost immediately. Even though I had focused on studying English and Creative Writing I had always had a tinkering knack for computers so it was a great fit. I learned a lot and ended up working for a time there, but was always doing other things on the side to keep my creative brain engaged. I still taught writing and English, and eventually brought my focus back to writing with my career, but this time as a component to web content and production. My goal is to always work for myself, autonomous and producing creative content specifically, and that's the path and journey I'm still on. It's been an interesting ride and while not the normal path it is one that has been very rewarding personally in many regards.

What do you love most about your work?

When it comes to writing it's hard to say what I love about it other than I just love it to my core. If you stripped everything away and no money was needed to survive I would sit in a room and just write write write, staying in my big world of imagination. It's way more fun there than anything else for me. I love the feeling of inspiration when a new idea greats me, then I get to build as though building a house or puzzle. And then finally when the end-product is done, it's a great feeling to see it in my hands knowing that that thing came out of my imagination but is now something manifest in the world.

Who would you say was your most influential mentor while in college?

I really can't say there was one, but there was a trinity for me. I really started to excel in the scope of my writing when working with Robert Shapard as he was open to me exploring aspects of writing that were non-traditional. As most of the people in my program at the time would likely want to pursue writing more traditional short-stories or novels, I had a bent toward pop-culture and comic books, so he openly indulged and allowed me to execute those ideas without telling me what I "should" be doing.  He left it up to me to let my inspiration lead the way and trusted I would get there. Paul Lyons was a powerful influence on the words I use when writing and to this day some of the techniques he taught me are stuck in my brain. "Don't use 'as' if you can help it." I do often but at least I think about it before I do it. And last but not least, Ian McMillan's motto I use consistently when writing today. "Now that I've told you the rules of what not to do, if you're a good writer you'll go out now and find a way to break those rules and make them work." I was so sad to hear of both Paul and Ian’s passing and they both are sorely missed.

What advice would you give students to help them prepare for their career?

Be specific about your goals but flexible with your path. Have a destination in mind about where you want to land, but also be open to the opportunities that come your way even if it doesn't quite seem like it's where you ultimately want to head. My career has taken me across a lot of different paths and I've had many job titles, but I find a piece of all of them in what I do now and I wouldn't be able to do what I do now without having done those things first. Learning graphics at one job, learning programming at another, learning art design at another, the job path didn't seem connected at the time I was engaged in them, but down the road it was as though each of them was needed to fulfill a purpose for me later. In the end, you never know exactly where you're going to end up so in the meantime, just focus on being and doing your best where you're at and point your compass in the direction you want to go.

To connect with Diallo, log-in/sign-up for UH Connect at connect.uhalumni.org.