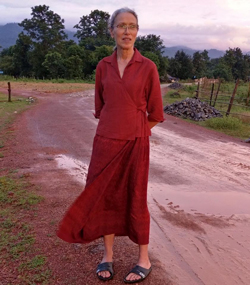 For more than 30 years, UH Public Health alumna Nancy Knapp has partnered with rural communities around the world to improve health. From her early days as a Peace Corps volunteer in the Philippines to her current work in Lao People's Democratic Republic and Myanmar, she has been driven by her global perspective and a desire to promote health and social equity.

“Americans are so lucky in so many ways,” Knapp says. “Many people in the world don’t have access to a system like we do. If we could better share resources, everyone in the world could be healthier.”

Her chance introduction to public health came in college, when she recieved a call that she was accepted as a Peace Corps volunteer and would travel to in the Philippines. Because she was a science major, she entered the public health program.

"I learned all about public health through international training and exposure,” Knapp says.

After returning home to Illinois, Knapp was interested in learning more about culture and anthropology. She applied to an anthropology program at UH Mānoa, but also began taking classes in public health, and eventually switched over. During her time at UH, she conducted field studies in Papua New Guinea, studying village health volunteer training programs with the support of a Catholic mission station in the highlands. Also while at UH, she met her husband, who was studying public health education.

Together, they moved to the Thai-Cambodian border to work with Khmer refugees who had fled war and genocide. Knapp saw that there wasn’t much of a public health presence in the camps: people mostly sought help when they were sick. As Assistant Medical Director with the UN, Knapp traveled among the 11 camps along the border to coordinate immunization programs with nonprofit organziations and hospitals for the more than 350,000 refugees.

“It was life changing in so many ways,” she says. “We were trying to immunize people, but also to understand their story. Every refugee had a story to tell about the horrendous things they had survived under the Khmer Rouge. Human beings can do much for each other – we knew we could help in a broader sense than immunizations.”

After five years in Thailand, Knapp moved her family back to the United States. As Women’s Health Director at the SouthEast Alaska Regional Health Consortium, she spent more than two decades working to meet the health needs of Alaska Native Tribes. Across her experiences, Knapp worked closely with communities to design and implement health programs, secure funding, create data systems, and provide training for local health workers.

Eventually, Knapp returned to the region that had ignited her public health career. She had planned to spend a year in Lao People’s Democratic Republic (PDR) working on HIV/AIDS, tuberculosis, and malaria programs, but that turned into five years of monitoring and evaluation work. Now semi-retired and living back in Alaska, she continues to support a remote hospital in Kayin State along the Thai-Myanmar border, and serves as a technical advisor with the Lao PDR government to work towards the elimination of malaria.

In reflecting on what has changed over her career, she says, “Public Health is more established now. In working with local providers, I’ve tried to challenge people to ask, “What in society and environment is bringing people to the hospital in the first place? I think there is understanding that in addition to needing doctors and nurses, we need public health outreach and health educators. That is the equally important goal.”