Shaping the future of food 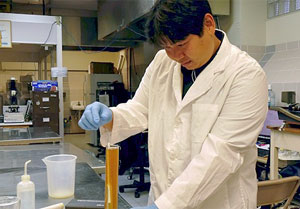 Alan Martin occasionally redefines himself, because he can. He chose a unique academic path, one less traveled, but one that is full of promise and personal pride.

After high school Martin pursued a degree in accounting. It didn’t take him long to realize that it was not something he enjoyed. He worked in various nightclubs and restaurants, including Duc’s Bistro, the family restaurant. An interest in culinary arts surfaced, and he decided to return to school.

Martin enrolled at Kapi‘olani Community College and in 2014 he earned an Associate in Science degree in Culinary Arts as well as a Certificate of Competence in Pastry Arts. When he graduated, his counselor mentioned an opportunity for students with an AS degree in culinary arts to transfer to UH Mānoa’s BS program in Food Science and Human Nutrition, with a Culinology option. Culinology is a relatively new field blending culinary arts with the science of food.

The idea caught Martin’s attention, but he did not immediately seek this transfer opportunity. Instead, he traveled to Europe, spending quality time honing his skills in patisserie and learning how to master the intricate layers of pastry in Sweden.

When he returned to Hawai‘i several years later, he was hired by the Kāhala Hotel and Resort, where he continues to work today as a bread baker. In addition, he is a fulltime student at UH Mānoa’s BS program in Food Science and Human Nutrition (FSHN), with the Culinology option. He is the first Kapi`olani CC graduate to choose this academic pathway.

Martin feels his experiences abroad gave him a global perspective of food professionals who are shaping the future of food through research and product development. With his classmates he studies food preparation and safety, bioengineering, chemistry, microbiology, and math, lots of math! Each course enhances his understanding of, for example, pathogens in food. Because of this he has become interested in the use of fermentative bacteria. He finds his studies challenging but at the same time fascinating.

Martin and his fiancée plan to be married after he graduates with a degree in Culinology. That being said, he will be only one of approximately 1300 culinologists nationwide—and the only one in Hawai‘i.