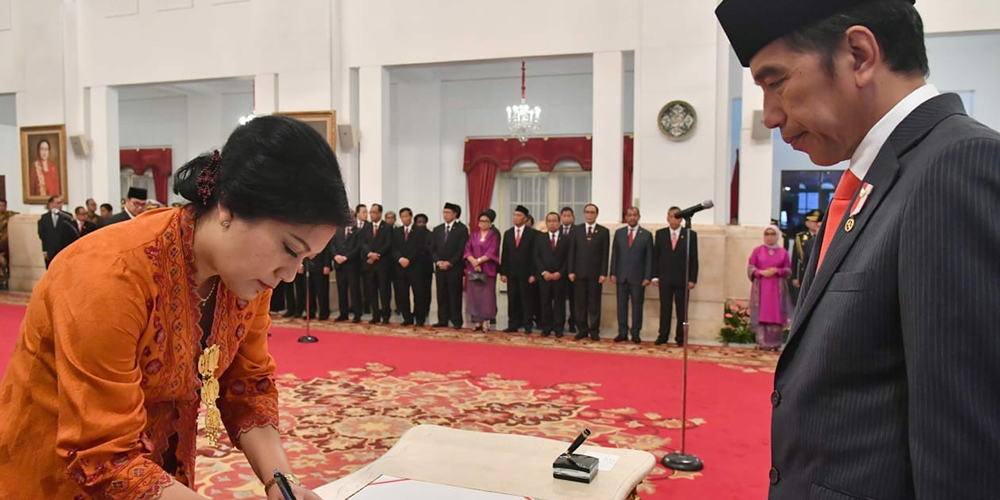 Photo caption: In front of Indonesian President Joko Widodo, Livia Iskander completes her official signing-in ceremony after she was selected to become a leader of the Indonesian National Victim Witness Protection Agency.

Across Indonesia, from the dense capital Jakarta to the far-flung islands, Livia Iskandar (DrPH ’12) uses her background in counseling psychology and public health to fight for human rights. Recently selected for the honor of being one of seven leaders of the Indonesian National Victim Witness Protection Agency (VWPA), Livia works to ensure that survivors of crimes are kept safe so that they can proceed with their criminal cases.

During the two decades she has spent working for human rights, she has counseled numerous victims of violence, especially gender-based violence victims, and helped to implement community-based psychosocial recovery programs. In her job with the VWPA, Livia works with her team to fulfil the rights of victims and witnesses. This entails providing police protection and procedural rights fulfilment, as well as medical, psychological, and psychosocial support. She works to encourage survivors to appear in court and testify to what they have witnessed or experienced.

She is driven by her sense of justice and her desire to see all people achieve basic human rights.

"To help people, you first have to assess what kind of services they need," says Livia, who earned her doctorate in public health at the University of Hawaiʻi at Mānoa in 2012. "My background in public health has helped me to look at not only individuals and families, but also more broadly at the systems that affect people's lives."

Livia decided to attend the public health program at UH after coming to Hawaiʻi for a conference on Aceh Recovery Programs Post Tsunami. She had previously worked in communities in Indonesia, designing recovery programs for survivors of domestic violence, sexual assault, community violence and military violence. But she wanted to learn more about policy-making. She saw a great need for more services for survivors, and she wanted the tools to advocate for policies supporting these services.

"Getting my doctorate in Hawaiʻi was one of the best decisions I've made," Livia says. The mix of Eastern and Western cultures appealed to her, and she met interesting people, many of whom, like her, are now public health leaders in countries throughout the Pacific basin. Livia counts fellow alum Vanessa Buchthal, DrPH, now a professor with UH Public Health, among the close friends she met during her time at UH. "I had very good support from my cohort," she says.

"Studying in Hawaiʻi, I learned about many cultures including indigenous populations, plus I met all these movers and shakers, from grassroots community levels to officials at the Hawaiʻi state legislature," she says.

While at UH, she worked at the Waiʻanae Coast Comprehensive Health Center, where she learned about community-based participatory research (CBPR). In CBPR, researchers work alongside community members on projects to improve the community's health. "It was very relevant to my work at the organization I co-founded in 2002, the PULIH Foundation," Livia says. "I wanted to design community health programs and translate research in order to improve community programs, and that's exactly what I learned about."

The process in Indonesia of selecting commissioners for the VWPA is long and rigorous, with many tests that involving writing, debating, applying psychological skills to make a change, and hands-on participation in the human rights and women’s rights movement. Livia is one of two women currently serving. "I want to see more equality," she says. "We still have some way to go. We need to have our voices heard. The effects of inequality can be seen in the number of people seeking our agency’s protection."

The cases she sees are difficult, and she needs to find time for herself to rest. "You have to avoid getting fatigued from these crime investigations," she says.

The VWPA offers support to survivors by working with professionals throughout Indonesia. The agency sends teams to protect witnesses, escort them to court, and ensure they aren't intimidated.

"Public health is about human rights for all," Livia says. "We are working to change society's beliefs and attitudes, and how people see themselves in relation to others."