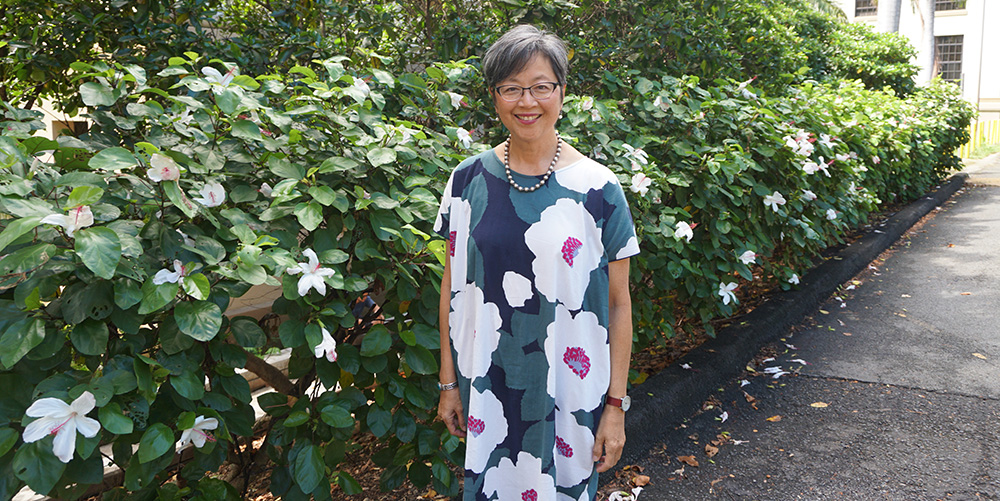 Christine Reiko Yano (Mānoa, MA ’84 & ’88; PhD ’95) is a professor of anthropology at the University of Hawaiʻi at Mānoa. She will take office as the AAS vice president following the March 21-24 conference in Denver, Colorado.

I am an anthropologist of Japan with research on popular culture analyzed through multiple lenses of gender, affect, nationalism, globalism and consumption. I come to the AAS vice presidency as an outlier—Asian American (sansei, third-generation Japanese American, born and raised in Hawaiʻi), working-class background, popular culture research. But it is these very outlier positions providing a perspective that may be of benefit to the field of Asian Studies. I have been active within AAS, serving on the Northeast Asia Council (including as chair) and the Distinguished Speakers Bureau. I currently serve on the American Advisory Committee of Japan Foundation (AAC, elected chair as of 2018). At the same time, I have recently been active in the field of Asian American Studies, serving since 2017 on the board of directors of the Association for Asian American Studies (AAAS) as a regional representative. This experience working from within the major Asian American Studies organization has taught me a lot about commitment, passion and engaged scholarship.

This mixing of Asian and Asian American Studies has shaped my research as well. My first book, Tears of Longing: Nostalgia and the Nation in Japanese Popular Song (Harvard University Asia Center, 2002), examined the sentimental popular song genre, enka, through emotionally based cultural nationalism and its fandom. It was strictly Japan-focused. My subsequent plan was to research different Japanese song genres, beginning with military song (gunka), school song (shoka), and the like. And I was midway through a textual and ethnographic study of gunka, when I stopped dead in my tracks. I—a Japanese American female from an American university—was not the one to do this study. The target was too easy, the conclusions too facilely drawn. As I sat in a gunka bar in Ginza, the walls decorated with military uniforms and medals, a battery of miniature balsa World War II fighter planes flying around the room, watching elderly men flanked by young women dressed in Meiji Era school-girl uniforms fervently sing the military songs of their youth, I shook my head not only at the bizarreness of the scene, but at my own fraught positioning. Even if I could “pass” at some level, I did not want to be the one to do an ethnography of Japanese military songs. I left the bar knowing I would never complete this project.

Instead, I turned to a topic much closer to home. Having secured a position at the University of Hawaiʻi in 1997, I was living once again in the familiarity of my hometown, Honolulu, where I knew the sociopolitical terrain like the back of my hand. Because of this, I could conceptualize research projects easily and with complexity, make contacts readily, and engage in very grounded work. My first Hawaiʻi-based project focused on a Japanese American beauty pageant (Crowning the Nice Girl, University of Hawaiʻi Press, 2006). My second focused on Japanese American stewardesses with Pan American World Airways (Airborne Dreams, Duke University Press, 2011). In both of these, I could use not only my local knowledge, but also my knowledge of Japan to bridge fields of Asian and Asian American Studies. I brought Japan deeply into what might have been a Japanese American project, not only because I could, but because it was there in the research itself. And I have come to seek further projects that do so. For example, my research on the Japanese company Sanrio’s global cute character, Hello Kitty, involved fieldwork in Tokyo as well as in the company’s U.S. headquarters, and in stores and other venues across the U.S. (Pink Globalization, Duke University Press, 2013).

My point here is that Asia obviously does not stop at the borders of any one continent or ocean. Rather, some version of Asia extends well beyond, on the shoulders of immigrants, refugees, tourists, commodities, food, song, and ideas. Asia exists in its transnational diasporic settings, as well as its natal homes. It is this notion that I would like to emphasize in my leadership role within the Association for Asian Studies. Diasporic Asia takes the continent and islands of Asia as only a starting point of inquiry. My research, positionality, and organizational leadership role lead me to consider ways to effect stronger and deeper ties between Asian Studies and Asian American Studies. While acknowledging the very real differences between these two fields, I strongly urge us to learn from each other by leaning in.

The idea of bridging the fields of Asian and Asian American Studies is one of a number of issues I have in mind to explore, both with those upon whose shoulders some of these may ride (e.g. AAS staff and officers), as well as with the general membership. Acknowledging that some of these ideas may already exist in your institutions or regions, I invite your feedback.

For some decades now, Asian Studies has been witnessing the passing of a generation of many of its key founders, its first generation scholars. It might behoove AAS to take on the task of securing oral histories of scholars. If this already exists in different places, could AAS act as a coordinating clearing house of information? Secondly, acknowledging not only the changing job market and scarcity of academic positions, but also a generational shift of interests away from the ivory tower and toward “applied” work, AAS may want to further support and explore this shift. This is a rich and vital field that has the potential to connect ethically-driven scholarship directly with communities. And third (the least developed) is something I tentatively call “Asia Riffs.” The idea is to juxtapose people with an Asia focus who would not likely know or be in conversation with one another. Tied thematically, this small grouping of twos or threes might discuss, interact, and possibly even collaborate on a project together. Some possible themes:  rupture, coalescence, transcendence. Some possible juxtapositions: visual artist and social theorist, poet and historian, composer and philosopher. I believe in the power of the unexpected, even as we try to second-guess the realm of results. At this juncture, these four issues—bridging Asian and Asian American Studies, oral histories, applied Asian Studies, and “Asia Riffs”—are but musings that need far more careful consideration and planning before any form of implementation. There are budgets and staffing to consider as necessary bedeviling details. But better to think big than not at all. Furthermore, these ideas may stimulate some of your own, implemented at your institution, department, library, or museum.

I am honored to take office as vice president of the Association for Asian Studies because I believe in the value of this organization. I seek AAS's help in shaping the organization’s future, embracing its truly trans-disciplinary, trans-border potential. In the twenty-first century, that potential must reaffirm a core ethical base. Whereas in the past, political engagement may have been the decision of a small band of committed scholars, our very institutional and societal foundations beg us not to shirk this responsibility. Thus we as a large body of scholars of Asia must find within ourselves the wherewithal and commitment to address the politics of what we do as individuals and as a group. I ask AAS's help in creating a set of best practices that will strengthen a sense of engagement centered upon scholarship of Asia and guided by the deepest sense of responsibility.