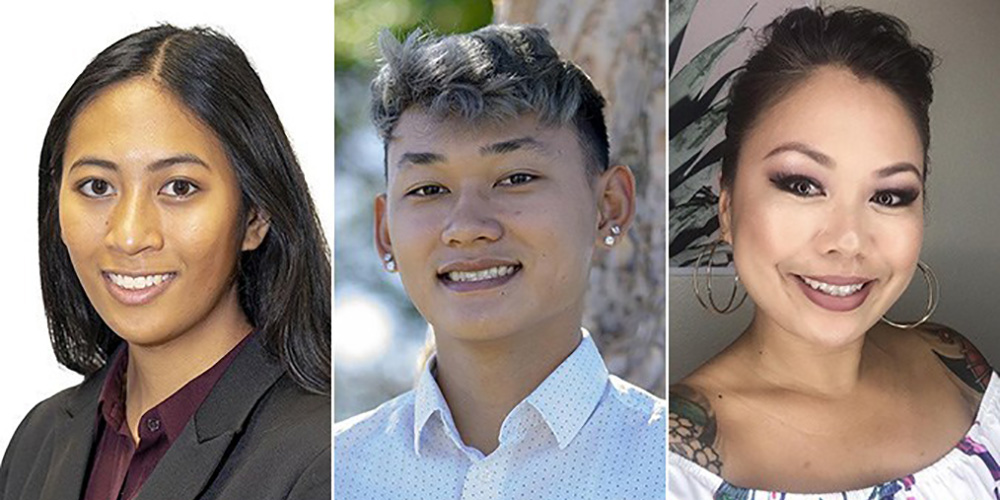 Destiny Apilado was selected as the 2019 New Century Transfer Pathway Scholar from Hawaiʻi. A natural science major, Apilado will receive a $2,250 scholarship and be recognized together with Leeward’s Interim Chancellor Suzette Robinson at the 2019 Annual Convention of the American Association of Community Colleges held on April 15 in Orlando, Florida.

The New Century Transfer Pathway Scholar is awarded to the student receiving the highest All-USA Academic Team application score in each state. This year’s competition drew more than 2,000 applications. The program is sponsored by the Coca-Cola Foundation and the Coca-Cola Scholars Foundation with additional support from the American Association of Community Colleges and PTK.

This marks the third time in the past five years that the New Century Transfer Pathway Scholar for Hawaiʻi came from Leeward’s PTK chapter.

Leeward student Isaac Serrano was awarded the PTK Pacific Region Transfer Scholarship in its inaugural year. Serrano will be awarded $1,000. He is Leeward’s PTK chapter president and an early college student from Waipahu High School. Serrano will earn an associate in arts degree and his high school diploma this semester.

Leeward’s PTK advisor, Associate Professor Michael Bauer, said, “Our chapter has experienced rapid growth, setting membership records in each of the last five years. We’ve had the largest membership growth in the Pacific region. In 2017, we recruited 265 new members. We are all so proud of the accomplishments of our members.”

Candi Mirafuentes, a cosmetology student at Honolulu CC, was named a 2019 New Century Workforce Pathway Scholar and will receive a $1,250 scholarship. Awards are made to the top-scoring student in each state who plan to enter the workforce upon the completion of a degree or certificate.

“We are proud of Candi for receiving this prestigious award and for representing Honolulu Community College and the state of Hawaiʻi,” said Honolulu CC Chancellor Erika Lacro. “Recognitions like these reaffirm the campus’s mission of providing accessible educational opportunities through an engaged learning environment that will lead to career preparation.”

This scholarship is the first of its kind to support students at associate degree-granting institutions who plan to enter the workforce upon the completion of a degree or certificate on a national scale. The program is sponsored by The Coca-Cola Foundation and PTK.