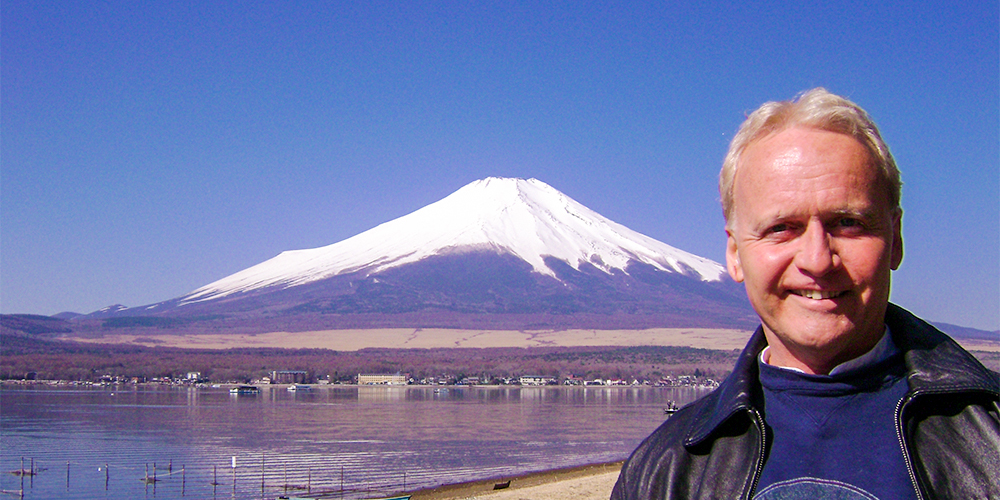 Greg Shepherd (Mānoa, BA ’77; MA ’87, MM ’88) spent several years in Japan on a music fellowship at the Tokyo University of Fine Arts and Music. While there, he studied Zen Buddhism and made several trips to Seoul, South Korea. His first book, A Straight Road With 99 Curves, is about his personal journey in the practice of Zen Buddhism.

His new book, Sea of Fire, is a suspense novel about a man named Patrick Featherstone who is hired to find a CIA agent who defected to North Korea with nuclear weapons secrets.  Featherstone has another secret mission: to rescue the love of his life from political prison. Sea of Fire can be pre-ordered on Amazon. A sequel to Sea of Fire is scheduled to be released in 2020.

Shepherd is currently a professor at Kauaʻi Community College teaching music in the Liberal Arts program.

One doesn’t always picture a college music professor writing a suspense novel. How did you decide to write Sea of Fire?

I've long been interested in North Korea, having lived in Japan for five years and being close geographically to the Korean peninsula. Secretive societies are fascinating simply because they're secretive and very difficult to penetrate on any level. Also, I've always liked spy novels and have read some that were, let's say, not so good, so I decided I should put my money where my mouth is and try writing one myself. I was very fortunate to get a two-book deal with Simon and Schuster. The sequel to Sea of Fire features the same basic cast of heroes and some of the same villains. It is set at the Tokyo Olympics in 2020 and will come out next year in time for the games.

Your Simon & Schuster bio states that you smuggled democracy papers to Catholic priests and nuns in Seoul who were actively seeking free and open elections. How did that connection come about and can you describe your relationship with them?

A close acquaintance told me about the church in Seoul that did this and asked if I would be interested in bringing in contraband literature to South Korea. I was young and reckless, so I said yes. Luckily I didn't get caught, and I like to think I played a small part in South Korea becoming a free and open society, as I hope will happen in North Korea someday, but I'm not optimistic.

So little is known about North Korea. From your research on the country, what one thing surprised you most that you think everyone should know?

Everything, and I mean everything, in the image they present to the world is a total and complete sham. Everything is calculated to present an image of a civilized and happy society, when in fact it is a totalitarian hellhole ruled with an iron fist by a paranoid madman. Just look at all the members of Kim Jong Un's inner circle whom he's had murdered, some in horrific ways. Astoundingly, there are still apologists in this country, mostly in academia, who see North Korea as somehow being a victim of a world that doesn't understand the place. The only thing to understand really is that it is hell on earth for the 25 million poor people who live under the crushing yoke of the Korean communist party. A very small portion of the ruling elite live very well while everyone else starves, but on the other hand, that ruling elite is always looking over its shoulder for Kim's thugs coming to take them away. Also, it's important to remember that the gulag concentration camp system of the country has been rightly likened to the concentration camps in Nazi Germany.

Have you visited, or do you hope to visit North Korea someday?

At one time I hoped to visit, but after Otto Warmbier was murdered while in captivity I quickly changed my mind. Plus, it seems like an incredibly depressing place. I watched a National Geographic documentary recently in which Michael Palin of Monty Python fame had to watch his famously uninhibited mouth at all times for fear of ending up like Otto Warmbier. I can't imagine visiting a place like this and supporting its cruel regime in any way with my hard currency.