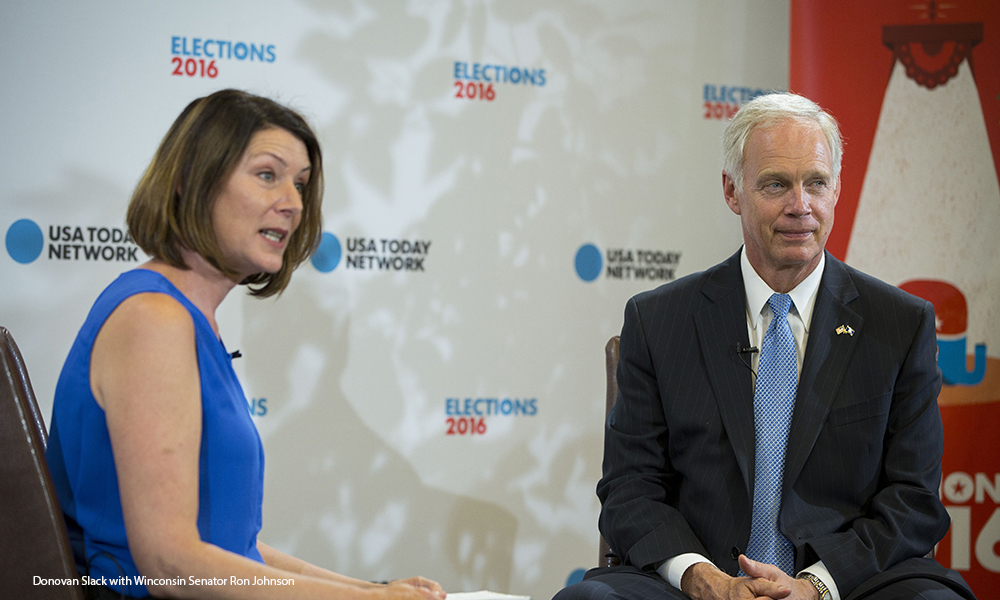 USA Today reporter Donovan Slack says her job is “an opportunity to make an impact.” The 2000 graduate of Kapi‘olani Community College and former editor in chief of Kapi‘o News has also written for The Boston Globe and Politico, where she was a White House correspondent during the 2012 presidential election, and rode on Air Force One as a member of the press corps. Since 2013, she has been a USA TODAY correspondent in Washington, D.C., where she lives with her rescued shih-tzu-terrier Nicolas.

“It’s a long jump,” she says, “from the foot of Diamond Head to a block from the White House.”

How did you choose Kapi‘olani Community College and a career in journalism?

I moved from California to Hawai‘i after graduating from high school, and lived there through my twenties. In my early years I went through a succession of jobs, every so often moving to a new thing. I sold insurance, I sold advertising, I was a front desk clerk, I did some accounting, and I worked for a travel bureau. Nothing seemed to work for me, and I wasn’t that great at any of it either. I knew I needed to return to school.

Hawai‘i’s community college system is remarkable. Tuition is affordable for those of us on our own without a ton of money. I went to the counseling office with no idea what I wanted to do.  I took three different career aptitude tests, and they all recommended journalism, so in my first semester I took Journalism 101. The first assigned reading was about public service journalism, and a reporter in New Jersey who wrote about problems with local clinics. Her story led legislators to change laws, closing some clinics and fixing others. That was it. I was hooked. One person can write one story that changes the laws of a state. I wanted to do that.

Northwestern University’s journalism school took only three transfer students, and I was one of them in 2000. I graduated three years later as valedictorian of the journalism class. My four-year degree took six years, but I wouldn’t trade a minute!

How did your studies at Kapi‘olani CC prepare you for a career in journalism?

Working at the paper and taking the journalism classes gave me a taste of what I do now. I would call the chancellor for an interview, a student asking the head of school tough questions. I quickly latched on to this role of taking power to account. My skills developed over the years, but it started there at Kapi‘olani.

I valued a lot of coursework you might not assume prepares you for a journalism career: Sharon Rowe’s logic course – logical thinking is so important in clear writing; linguistics with Louise Pagotto, a study of languages and words. I had professors who mentored and inspired, spent time with me when I showed up at their offices, too numerous to name. Of course, there was my journalism professor, Wini Au. Keith Kashiwada, my speech professor, and drama professor Sandra Perez, but there are many others. I’m still Facebook friends with a number of them!

It takes chutzpah to apply to Northwestern as a transfer from Kapi‘olani. I had the courage to apply and the skills to be admitted because of these people.

What motivates you to do this work?

Impact. I get to meet people -- not only members of Congress or the President, but everyday people -- and learn about different cultures and lives, drop in and help them. I’m blessed to spend time with veterans who needed medical care but have had problems. My stories have helped veterans, and I’m still in touch with some of them today. It’s truly rewarding to know you’ve touched and improved people’s lives.

A vet in Oklahoma had a tumor in his jaw and his Veterans Affairs hospital didn’t do anything about it. He went to a doctor who sent him to a dentist, but years later, a different doctor said, “Holy crap! You have a tumor in your jaw.” By that point, it had grown to encompass large areas of bone.

I didn’t have to take a side. I wrote the story and the whole hospital management got replaced. He got the care he needed. The VA launched an investigation into the system allowing it to happen.

When did this job make you feel the best?

There have been a number of rewarding moments. My reporting helped create national laws that exist today. In 2015 there was a new law forcing the Department of Veterans Affairs watchdog to disclose internal investigation reports on veterans’ healthcare. I had reported that the Inspector General had been withholding reports, including cases where veterans were harmed or died. This law forced every report to be released within days of its completion. This is lasting impact.

Until last year, the DVA kept quality ratings on veterans’ nursing homes but never revealed them publicly. Veterans and their family members could use these. I published them and wrote a story in partnership with The Boston Globe. Congress drafted legislation mandating the VA release the ratings going forward and the president signed it into law.

What advice do you have for today’s aspiring journalists working on Hawai‘i’s community college newspapers?

Journalism is no longer just print, TV, a magazine or digital. You have to do it all. I write a story for the web, thinking about how it will look when people see it on their phones. I shoot photos and video. I do the standup (TV spot). I have to go on TV and talk about my story, on CNN or NBC. They call you, and you go on and you have to know how to be succinct, presentable and appealing to a TV audience. Then I add social media. Media journalists are the new thing. Don’t stick to one thing – learn to do it all.

What do you miss about living in Hawai‘i?

The weather, obviously, but most of all the people. I have so many friends there; one of my best friends in the world lives there. I get back every few years to visit, but of course there’s nothing like living there!