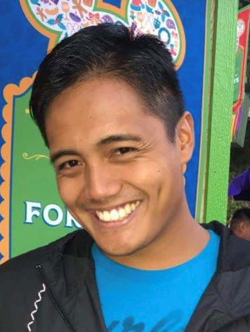 Ronald Santos graduated from Leilehua High School in 2009 and now, less than 10 years later, he’s a full-time teacher there. But, like many other students who start their career path at Honolulu CC, his journey was anything but a straight shot.

Santos was born in the Philippines and moved to Hawai‘i when he was 3 years old. After high school, he enrolled at Honolulu CC with the intention of getting certified as an electrician, but found classes for that major difficult to get into.

So he switched course and started pursuing a liberal arts degree, getting more and more active in various extracurricular activities during his time at the school. He became part of the school’s student government, worked for the Student Life and Development office, and wrote stories for the Ka Lā newspaper.

“I still cherish the relationships I have built from being involved in those organizations because they gave me a sample of things that truly interested me,” Santos said.

Some of his best memories as a student were when he went on trips for the student organizations like the Ho‘opili Hou leadership conference and the College Media Association’s annual journalism conference in Orlando, Florida.

“Since, I enjoyed traveling with the campus organizations, I wanted to pursue a career that allowed me to get a job anywhere, so I decided on teaching English,” Santos said.

After getting his associates degree from Honolulu CC in 2012, that dream led him to UH Hilo, where he got his bachelor’s degree in linguistics and a certification in TESOL (Teaching English to Speakers of Other Languages).

After receiving his bachelor’s degree, Santos came back to O‘ahu and applied to be an educational assistant at Leilehua High School and was quickly hired.

“When they learned about my background in ESL, I was asked if I was interested in teaching some ESL science classes,” he said.

“The most important thing I learned about my career is to try different things,” he said. “You never truly know what career is best for you unless you actually apply and see first-hand what the job is like.”

Santos is well on his way to get a state approved teaching license, yet he hopes to get a chance to teach summer programs abroad some day.

“Teaching is rewarding, but not without its challenges,” he said. Like many teachers, getting students to participate and engage in the classroom without getting out of hand hand are daily tasks for Santos.

He plans on staying at Leillehua High School and hopes to move up the ranks to be an administrator one day.