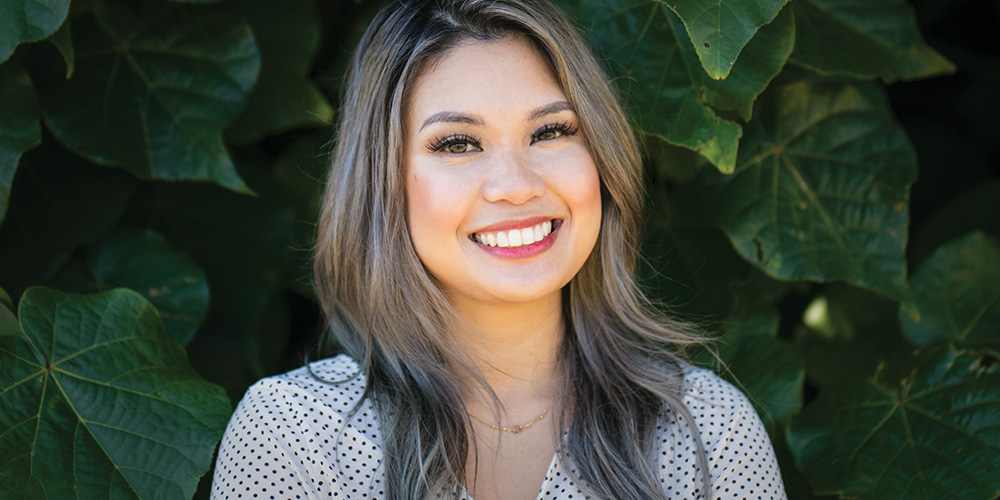 Take a look around. Ever wonder where certain posters or logos come from? Or the intricate labeling on packages and business cards? Well they just might be the work of Honolulu Community College alumna Sheryl Nicolas.

After starting school in late 2008, Nicolas graduated from Honolulu CC with an associate’s degree in communication arts in 2011. Upon graduation, she interned at Design Asylum where she was kept on after demonstrating her efficiency and talent. Today, she is a designer at the company.

“We specialize in logos, business cards, and wall designs,” Nicolas said. “Basically, if it can be printed, then we got you covered.”

Before landing a job, she was like many other students interested in art. Her passion started to take flight after being introduced to Photoshop by her brother in the sixth grade.

After completing high school, she worked at a photo company, where she learned some techniques of the trade. When she started looking for other work, she said she preferred smaller business, as she enjoyed the process of trying to help them get on their feet.

“I liked art, but always wondered ‘What can I do?’” she said.  “I found graphic design and fell in love.”

Having recently turned 29, she reflected on her experiences at Honolulu Community College. The excellence in instruction provided by the faculty and the affordable tuition rates hardly go unnoticed, Nicolas said.

She appreciated the “tough love” she was shown by the faculty, especially the instructors she had in the Communication Arts program.

“They were always pushing us. There was no sugar coating, and this really prepared you for real life,” she recalled.

It was not always rainbows and sunshine for Nicolas. The graduate recounted sleepless nights, at least 500 logo sketches, and times when she was told to throw away pieces she had done. But she confessed that she was happy her teachers were not always nice. The struggles helped her to build character and personal integrity, while still being strong in her opinions.

“Revise and revise, and don’t take it to heart,” she said.

She also liked that she felt challenged. The deadlines, real timelines, and “not being babied” made her feel that her education was definitely preparing her for the real world.

Having graduated nearly six years ago, Nicolas now has some tips for others.

“You have to really want it,” she advised. “You just have to keep pushing through. Don’t doubt yourself.”

She described her own obstacles of having people in her life doubt what she was doing, as well as put down the things she has created.

“You just have to do it better and prove people wrong. But do it for yourself,” she said

When asked to describe her college experience in three words, Nicolas couldn’t help her response: “It was badass,” she said with a laugh.