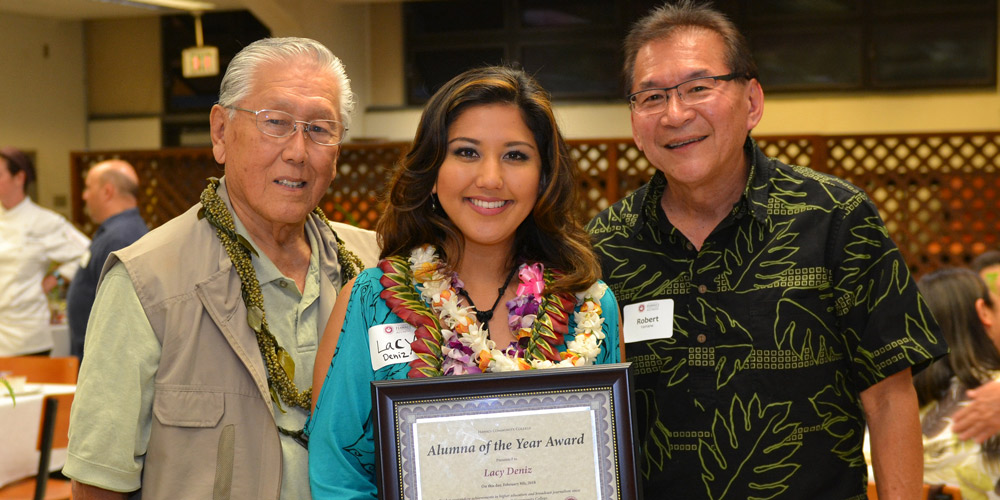 Lacy Deniz, who was born and raised in Hōnaunau, always dreamed of being a television news reporter. She recalls watching KGMB and “just knowing deep down inside that I could really see myself doing that.”

She has achieved that dream, and she is now the traffic reporter on Hawaii News Now Sunrise.

“It’s really about doing a service to the community,” Deniz said recently of her job on the morning show. “Every morning I get to wake up and help people get to work in the morning.”

Before she was a news reporter, Deniz was a student at Hawai‘i Community College’s (Hawai‘i CC) campus in West Hawai‘i, which was formerly in Kealakekua. She earned her Associate of Arts in Liberal Arts degree, graduating in 2012. She then transferred to the University of Hawai‘i at Mānoa where she earned a bachelor’s degree in journalism and communications.

“We are proud to recognize Lacy Deniz as the recipient of our 2018 Alumni of the Year Award,” said Robert Yamane, President of Hawai‘i CC Alumni & Friends. “She is part of the younger generation of alumni and has achieved success within her first 10 years since graduation, embodying what it means to learn, to lead, to serve and to inspire future generations.”

During the 5th Annual Hawai‘i Community College Day event on February 8, Deniz participated in a panel discussion and answered questions from middle and high school students about how to succeed in college.

Hawai‘i CC Chancellor Rachel Solemsaas said, “Lacy’s story is a testament to the value of students starting their higher education journey at Hawai‘i CC before transferring to a university. For decades we have provided these pathways for students and we continue to develop new ones. We are proud to have Lacy as a member of the Hawai‘i CC ‘ohana.”

Deniz credits her experience at Hawai‘i CC and the support she received at the college with helping her secure an internship at Hawaii News Now that launched her career in journalism.

“I really want to thank Hawai‘i Community College for helping me take that leap of faith and pushing me to the next level,” Deniz said. “They encouraged me to think about what I was going to do after college and figure out the steps to get there, and they backed me up through the process.”

Lacy was crowned Miss Kona Coffee in 2011, and then participated in the Miss Hawaii pageant. She describes hula as one of the main passions in her life, and recently she participated with her halau in the Merrie Monarch Festival Competition.

When she’s not in the studio, Deniz loves spending time outdoors hiking, horseback riding and paddling.

The Hawai‘i CC Alumni of the Year Award was established in 2017 and recognizes the success and achievements of Hawai‘i CC alumni. The award increases awareness of the positive outcomes of the college, builds alumni pride, and creates stronger connections back to Hawai‘i CC. Recipients are honored at campus events and celebrated during the course of the academic year.