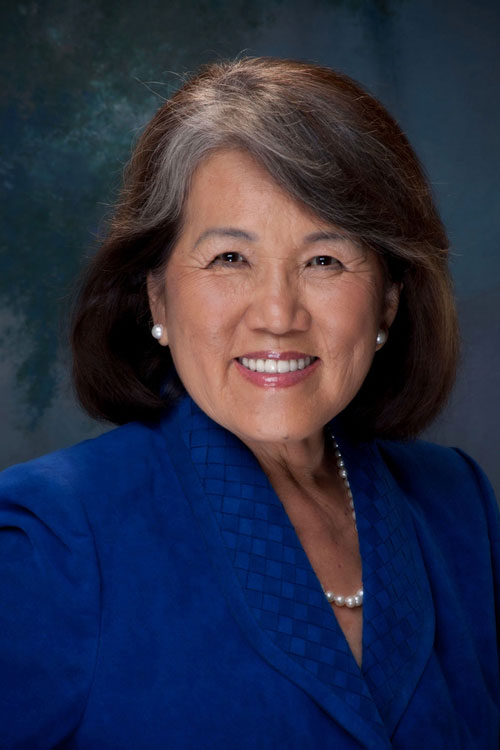 Dr. Jackie Young is a consultant, speaker, lifelong learner, volunteer and advocate for social change and healthy communities. She has consistently worked to reduce discrimination and create a more equitable society. Young currently serves as an appointed member of the Hawai‘i State Judicial Selection Commission, and the Hawai‘i State Advisory Committee for the U.S. Commission on Civil Rights; and as a board member of the American Civil Liberties Union of Hawai‘i and the American Cancer Society’s Hope Lodge Campaign. On the national level, she is a member of the U.S. Department of Defense Advisory Committee on Women in the Services.

After graduating from Punahou School in 1952, Young enrolled at UH Mānoa and took part in extracurricular activities which included serving as song leader, Ka Palapala Korean beauty queen, and columnist for the Honolulu Star-Bulletin and Ka Leo. She was also a member of the UH golf team and earned a letter in golf. She left UH in 1954 when she married a UH classmate, Harry Daniels, and became a military spouse and full-time homemaker. She relocated to Colorado, lived in Berlin when The Wall was built, then moved to segregated Augusta, Georgia in 1962 – a civil rights battlefield. Upon her return to Hawai‘i in the mid-1960s with her four children, Young reenrolled at UH as a non-traditional student and earned her BS degree in 1969.

In 1975, after moving to Virginia and obtaining her MS degree, she worked with severely disabled children at The Maryland School for the Blind when congressional hearings were being held for what became the passage of Public Law 94-142, Education for All Children Act, requiring the deinstitutionalization of children with disabilities. She testified at public hearings and began her civil rights advocacy work.

Upon Young’s return to Hawai‘i in 1977, she worked for the Hawai‘i State Department of Education (DOE) as an administrator responsible for implementing P.L. 94-142. In 1985, she became the DOE sex equity and Title IX administrator. She also served as adjunct professor at Hawai‘i Pacific University for 10 years. She then earned her PhD, chaired the Hawaii Women’s Political Caucus and was elected vice president of the National Women’s Political Caucus. In 1990 she was elected to the State House of Representatives and then elected in 1992 as vice speaker, the first woman to hold that position. She championed issues related to Native Hawaiians, the environment and crimes against women. In 1994, Young was appointed as the state’s affirmative action officer. While undergoing breast cancer treatment and speaking publicly about her experience in 1998, she managed the nation’s first marriage equality campaign, Protect Our Constitution, in partnership with the Human Rights Campaign. She later served as the UH sex equity coordinator. Young became an executive with the American Cancer Society Hawai‘i Pacific in 1999 and retired in 2013 as its chief staff officer. She is a recent kidney cancer survivor.

Young has received numerous awards for her outstanding community service and work in gender equity and civil rights from organizations including the National Education Association, ACLU, YWCA, Korean American Foundation Hawai‘i, City and County of Honolulu, and Punahou Alumni Association. She is a recipient of the President’s Award from the Union Institute & University. Her advocacy work and life story have been featured in television specials, syndicated newspapers, and national and international magazines.