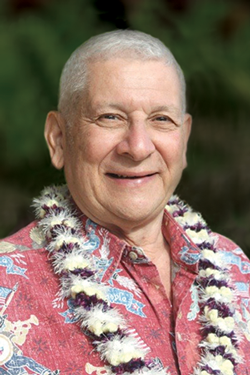 BA in government, 1963, University of Hawai‘i at Mānoa

Samuel Slom served as a member of the Hawai‘i State Senate representing District 9 from 1996 to 2016.

He served as both Senate minority floor leader and minority leader over the course of his career. Outside of his legislative career, Slom also worked as both a private consulting economist and president/owner of SMS Consultants. A respected economist, Slom has broad financial and tax experience and has served as president and executive director of Smart Business Hawaii, economist for Bank of Hawaii and as assistant director of the Tax Foundation of Hawaii.

With an extensive journalism and media background, Slom is a past contributing columnist for the Honolulu Advertiser, Honolulu Star-Bulletin, Pacific Business News, Island Business and MidWeek. He has also contributed articles to Forbes, The Economist, Money, USA TODAY, CNN and National Review. He emceed and produced KHVH radio’s “Viewpoint” talk series and KGMB’s “Voices of Concern.” Additionally, Slom taught business for the American Institute of Banking, the Japan-America Institute of Management Science (JAIMS) and was an assistant professor at Hawai‘i Pacific University.

Slom has received numerous civic and patriotic honors. He is a recipient of the Fellow of the Pacific Award from Hawai‘i Pacific University and was awarded a George Washington Honor Medal for Economic Education by the Freedoms Foundation at Valley Forge. He has served as president of the Hawai‘i Economic Association, secretary of the Conservation Council of Hawai‘i, chair of the U.S. Small Business Administration’s Advisory Council, and the governor’s and mayor’s Small Business Advisory Councils.