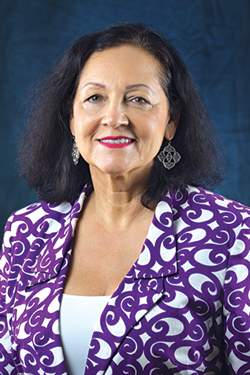 BA in English, 1981, University of Hawai‘i at Mānoa

Kitty Lagareta, chief executive officer of CommPac, is recognized as a leading public relations professional, having provided strategic counsel on some of Hawai‘i’s toughest issues over the past 30 years including environmental, corporate, public safety and political crises. As a member of the global leadership team for IPREX, a partnership of independent communications firms, she has worked with public relations professionals from all over the world to develop the profession and build business together. She is a respected business owner, a thought leader and a community leader.

Before joining CommPac, Lagareta was a founding board member and the first executive director of Hawai‘i’s Ronald McDonald House. Later, she served as vice president of the Kapi‘olani Health Foundation. She serves on the boards of the American Red Cross, Hawaii State Chapter, Diamond Head Theatre, Bishop Museum and the advisory board for the Hawaii Island Land Trust. She is a past president of the Rotary Club of Honolulu, Hawai‘i’s oldest and largest Rotary club; and she served two terms on the board of the Chamber of Commerce of Hawai‘i. Among the other organizations on whose boards she has served are HiBEAM (Hawai‘i Business and Entrepreneur Acceleration Mentors), Young CEOs and the Hawaii Justice Foundation.

Lagareta has received numerous awards from the Hawai‘i chapters of the Public Relations Society of America and the International Association of Business Communicators.