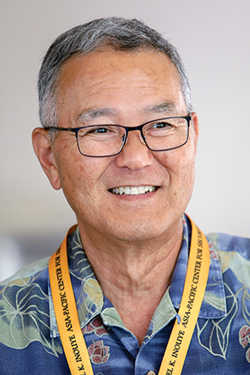 BEd in elementary education, 1974, University of Hawai‘i at Mānoa

For 31 years, James (Jim) Hirai served in the U.S. Army in a range of leadership positions.  As the special assistant to the Commander, Combined Forces Command – Afghanistan, he worked in the Office of Security Cooperation – Afghanistan leading the external support to the Afghan Ministry of Defense and National Army.

Hirai supports organizations that perpetuate the legacy of Japanese-American World War II veterans and he promotes the work of the Pan-Pacific American Leaders and Mentors. He received his BEd from the University of Hawai‘i at Mānoa and was a Distinguished Military Graduate from the Army ROTC program. He earned a master’s degree in education from Troy State University and is a graduate of many military courses including the Infantry Officers Basic and Advanced Courses, the Armed Forces Staff College, and the U.S. Army War College.