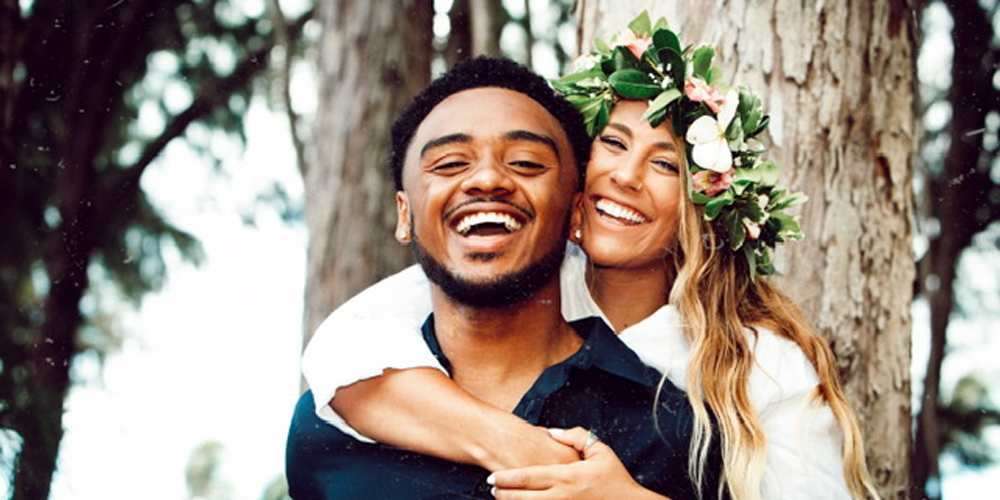 For the second year in a row we’re celebrating alumni love by sharing the romantic, unusual and sometimes unexpected ways UH Mānoa lovebirds found one another. 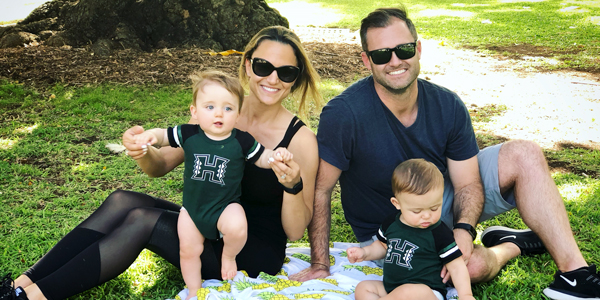 Two California natives moved into the freshman towers across from each other, the journalism and communications major in Lehua and the UH baseball player majoring in sociology in Lokelani. Throughout the next four years they would share mutual friends, attend the same parties, and somehow become friends on Facebook.

It wasn’t until their last semester of college that they officially met... at the infamous Varsity bar! Marlo and her friends (allegedly) stole Matt’s table which then prompted their first official dialogue. Matt who knew Marlo’s friends well had asked one of her roommates to “put in a good word for him.” But she didn’t... she forgot!

So by fate, Marlo randomly reached out to him on Facebook the following week with “Hey, we are Facebook friends!” From there they went on their first date. And because Matt only drove a moped, Marlo, who worked as a nanny through college, picked up Matt for their first date in her Jeep with two car seats in the backseat. Now, a decade later Marlo still has two car seats in her back seat! The couple now lives with their twin boys in Redondo Beach and makes a point to visit Hawai‘i every year where it all began. 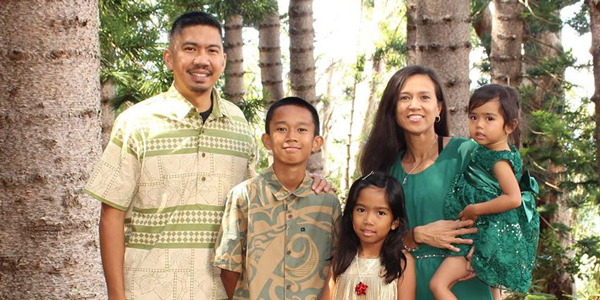 Aeza and Brian met in Filipino 101 class in the fall of 2000 at UH Mānoa. Brian was a junior college transfer student from California while Aeza (a local girl) was in her second year at the university.

Brian stood out; he was a tall Filipino guy which is not the norm in Honolulu. At first Aeza didn’t think anything of it, until one day in class they were assigned a project to go to one of the local Filipino restaurants to try out local Filipino food. While at the event, she invited a few of her friends and classmates to watch a Filipino movie. Aeza was helping out to promote a Filipino film which was showing at that time, “The Debut”. A bunch of friends decided to attend including Brian.

More opportunities to hang out with friends were presented at the UH dorms, at the local hangout “World Café” and they finally went on their first date to Makapu‘u Beach a few weeks later. Brian picked up zip-packs and some drinks and they set out for the drive to the east side in his surfer mini-van. Aeza felt safe with Brian and from then on they soon started dating.

Fast forward to today, almost twenty years later they have been married for 14 years in February and have three amazing children who keep them busy. They are still active members of the UH community. Aeza has been employed by UH since she graduated in 2003. They are active supporters of the UH Men’s Basketball team as season ticket holders for the past five years and have their youngest daughter currently attending the UHM Children’s Center. 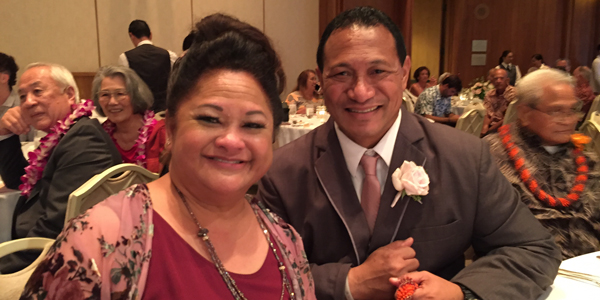 Va‘a and I met at the University of Hawai‘i at Mānoa on May 29, 1987. We were students selected to participate in HCOP (Health Career Opportunity Program). We had the opportunity to meet other UHM and UH Hilo students while participating in HCOP for a 7-week Summer Program. While we were in HCOP, we would go out as a group with our new friends from UHM and UH Hilo. After we completed The HCOP program, Va’a and I went on our very first date to a concert at the NBC arena.

Being a part of HCOP back in 1987 was truly a blessing for Va‘a and I! Life is good and we were so fortunate to have met one another at UHM. 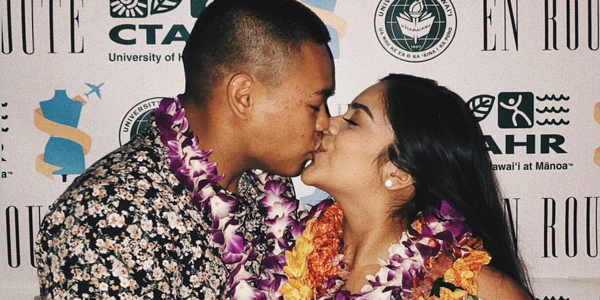 For some time I had my eye on this guy at UH. I would always see him in the elevator in Frear, walking to classes, and just around Campus center. I never talked to him because I was so shy. But I saw him EVERYWHERE. He didn't notice me at all which I liked because he was always walking with purpose and paying nobody any attention. Until one day he came into my workplace at Ala Moana Vans. I thought OMG this is my chance to talk to him. So I asked if he needed any help and he responded with, “oh no I’m okay thank you.” I helped another customer and when I went back to make conversation he had already left the store.

The next day was first day of classes. Come 7 a.m., I was LATE and on my way to class. I was headed to US military history and had no idea the school had an ROTC area. When I finally got down there I was the only student and completely lost until this fine hammah was walking my way. Nervously, I asked him for help and all he said was, “follow me.” He led me to a class that had already began and he just sits down. I was confused and took a seat. Luckily I was in the right class and was happy to see he was in my class.

Since it was the first day we went around the class and each student gave an intro. I made sure to pay close attention so that I could hear his name. Sammy Domingo! When it was my turn I said, “Hi my name is Stephanie I'm a Fashion Design Major and I'm from Los Angeles, CA". When class ended I was in such a hurry to my next class I was practically running out the door. In the parking lot all I heard was, "HEY YOU'RE FROM LA?" Hoping it was Sammy I turned around and TA DAAA! It was Sammy! He walked me to class and we got to know each other. Later that night I added him on Instagram and Snapchat 😉 Three years later we are married and have a beautiful baby boy that was Made in Hawai‘i. <3 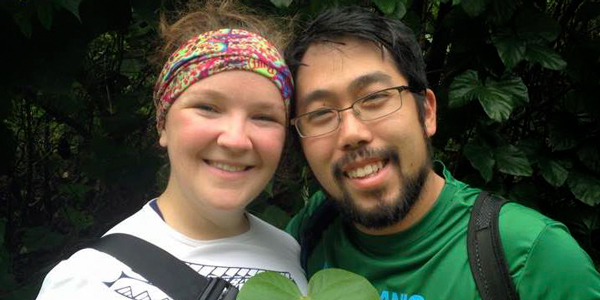 I met Isaac almost immediately after I moved to Hawai‘i to start graduate school, but after that we didn't speak to each other again for at least 6 months! In the spring I started playing ultimate frisbee with Mānoa Ultimate Disc (MUD), met Isaac again, and we soon started dating. Within a few months we were in love! We moved to the east coast in 2017 after I graduated and got married in 2018. Above all, we miss playing frisbee together in Mānoa! 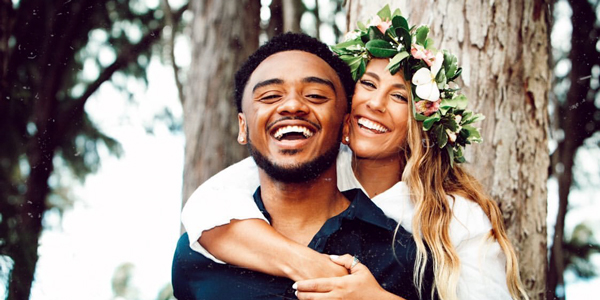 Rashawn and I met the very first week of school. We were both living in Lehua and Rashawn was one floor above me. My roommate and I kept our door open the first week so we could meet new people in our building! Rashawn and his friends walked by one night and we immediately hit it off. Turned out we had about three classes together so we would always save each other a seat 😊 after the first semester we were inseparable! Six years later we are happily engaged and planning our wedding! Forever thankful we found love at UH ♥ 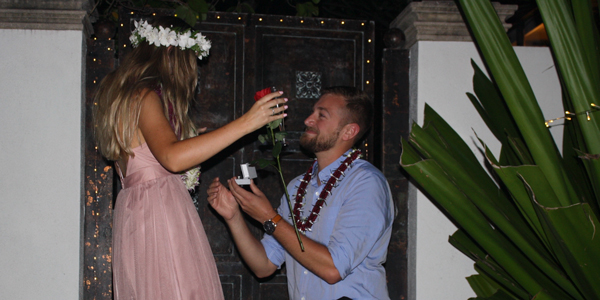 We met in 2015 through mutual friends at UH. We instantly clicked and had so much in common! We were both Business Management majors originally from the Pacific Northwest. We started dating shortly after we met and have been in love ever since. Fast forward to

May 11, 2019 I graduated from UH and that same night he proposed! We are getting married in August of next year! The University of Hawai‘i has a special place in our love story and we will always cherish our time there. 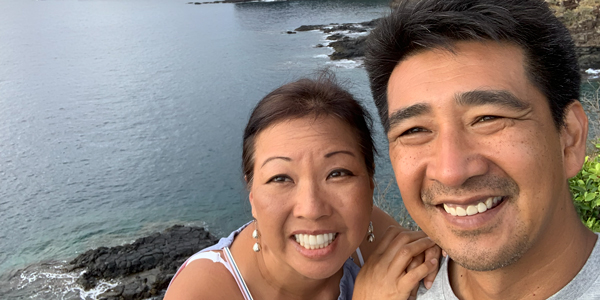 It was my first semester at UH and I was enrolled in Rick Mill’s beginning glass blowing class. The very first words my future husband said to me was, “You don’t own a watch, do you?”...I was pretty peeved. It was bad enough that I was always late but now this cute guy was calling me out on it. I tried to ignore him but eventually we became friends and three years later we got married. We’ve now been married for 23 years, have two amazing kids and a spunky dog, have traveled all over the world and still look forward to seeing each other at the end of the day. He’s always super supportive, even if it means driving me around and doing all the chores while I’m on crutches for two months or pulling all-nighters with me to finish projects that I’ve procrastinated on. Sometimes I think it’s amazing that we met at all as we had different paths planned for college but I’m so grateful that we did as I love him more today than ever. 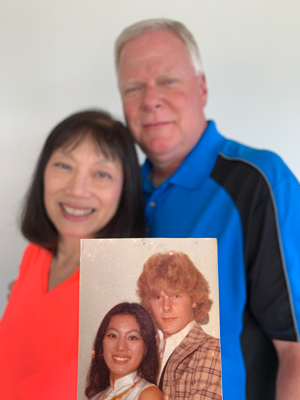 We met on August 29, 1978. I had moved into the brand new Hale Wainani about six days earlier and was in the process of getting to know the lay of the land. Though I like cooking, the apartment had nothing in it to cook with and the cafeteria which had my meal plan was not open yet. So I was raiding the burger joint on University and Dole which kept me alive. Then, a knock on my door came on that fateful day, a young woman who lived across the hall looking for pots and pans so she could cook for her mother, sister and cousin who were dropping her off at college. The next day we went shopping for those pots and pans, and we haven’t stopped cooking together since. We married about eight years later and are still together, 42 years this coming August.