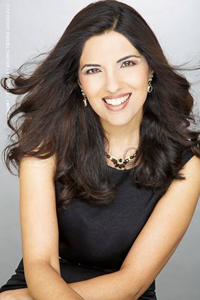 University of Hawai‘i at Mānoa alumna Shehzi Khan has traveled to several countries, speaks five foreign languages, has worked with high-ranking officials both in the U.S. Department of State and around the world and has even briefed President Obama on her portfolio. But back when, as a post UH Mānoa graduate, she was offered the opportunity to return to school to pursue two master’s degrees, she remembers questioning whether she could do it.

“I remember telling my mom, ‘I don’t know that I can do all of this,’” said Khan, who was also working as a lecturer at the time. “But we sat down and sketched out what the next couple of years would look like, and we figured out that it was possible.”

Two years later Khan graduated with two diplomas in hand with honors—an MBA from the Shidler College of Business and an MA from the Department of Political Science. She also won the Pacific Asian Management Institute award for student most likely to succeed in international affairs.  Fast forward to the present and Khan is now a member of the U.S. Department of State’s Policy Planning staff, where she is involved in helping shape foreign policy initiatives and developing long-term strategies that advance U.S. interests.

Most of Khan’s work today focuses on Pakistan, Afghanistan and cross-cutting South and Central Asian issues, and she has authored several papers within the government during the course of her career. Looking back at her time at UH, she can recall several courses and professors that have had a strong impact on her way of thinking.

“The areas I was able to focus on, I would have had a tough time finding an equivalent at the other mainland schools I was considering,” said Khan, who had a particular interest in political philosophy and international relations. “The Asian-Pacific focus is something really unique to UH.”

“You never stop learning,” said Khan. “You never stop reading, you never stop being curious and wanting to know more. All of these things have given me a fuller understanding of different parts of the world.”

As far as advice, Khan encourages students to take advantage of any opportunities that present themselves while in school.

“Take any opportunities you can to study abroad,” said Khan. “Take the opportunity to learn a foreign language. Take courses that are well outside your immediate field. All these things will make you a far more rounded person when you leave.”